Ahyan is solely leading 2019 CalChess Grade Level State Championship: Grade 8 winning all 3 games. His 3rd round win over USCF candidate master Abhinav yesterday is given below. I had to take last 2 rounds bye for him (with a 0 point bye for last round) as today is Suhaila's birthday program at home. And attending and helping out in sister's birthday is more important than winning a state championship. Family first!

Posted by Ashik Uzzaman at 9:52 AM No comments:

Ahyan Became Jointly Champion In Best of The West Under 1800

Ahyan and I played the 2 days format of Best of the West chess tournament organized by Bay Area Chess over the memorial day weekend. Ahyan played one section up at Under 1800 instead of Under 1600. I played in Under 2000 section. Ahyan won 5 games and lost 1 while I lost first 2 games and won the rest 4 games. As a result Ahyan will be wining some $800 or so while I will probably just a bit for jointly being 3rd with a bunch of others. Here are some of our games from the tournament.

The full standings may be found here.

Here is a quiz from my 4th game where I checkmated my opponent with White to move. Can you find it?

Posted by Ashik Uzzaman at 10:43 PM No comments:

Ashik Uzzaman was born and raised in Dhaka, capital city of Bangladesh. He finished his post-graduation in Economics from University of Dhaka while completing diploma in software engineering from NIIT. He came to USA with job as a java developer in 2005 and currently working as a Senior Software Engineer at Roku. He, along with his son Ahyan Zaman, is a regular participant in chess tournaments on the west coast.

How old were you when you first learned how to play chess? Who taught you?
– I was about 8 years old when I learned to play chess. I learned it from my cousin.
How has chess effected your decision making process off the board?
– Chess makes you efficient considering many possible outcomes in parallel. This helped me consider pros and cons of making any decision carefully. Chess also helped me learn when to take time, observe and weigh in detail before making any conclusions. So I think it helped me in my career choice, my education and my social skills.
How did your earlier career choices lead you to where you are now?
– To accommodate my chess tournament schedules, I picked relatively easier subject (Economics) during under graduate program. But later I focused on building my career as a Computer Programmer leaving chess for a long period of time.
How would you define your chess style?
– I was initially very aggressive attacking player. But as I started reading lots of chess books, I progressed to be a strategic positional player. I like Capablanca or Karpov’s style of accumulating small positional advantages.
Does your chess style transfer over into your business decisions as well?
– Yes. I often make decisions that are good for my team in the long term instead of looking at the immediate task in hand. Also I do a lot of trade off comparisons while deciding which option to choose while solving a problem.
What has been your worst chess mistake which has given you the biggest lesson?
– My biggest mistake was not focusing on the end game which resulted in loosing lots of games despite having advantages in the middle game.
What has been your worst career mistake that has given you the biggest lesson?
– My worst career mistake was not moving into Engineering Management roles despite getting several opportunities. I have been comfortably working as a software engineer in individual contributor roles for 19 years now. I am glad to share that I have amended the mistake and joining a company next month as an Engineering Manager.
Do you think chess has helped you to become more resilient in life?
– Yes. Chess teaches us perseverance and endurance. When I am stuck with a problem, I dont give up easily. I patiently continue to retry until I succeed. This is a direct habit learned from playing long games chess with intense struggles.
What do you hope to achieve professionally during the next couple of years?
– I want to see myself making good impact in my new project and hopefully take the pre-IPO company I am joining to public.

What is the biggest challenge to achieving that goal?
– Meeting continuous aggressive deadlines of multiple software projects; hiring and retaining the best engineers of bay area.
How would you relate these goals and challenges to the chessboard?
– In chess we have to keep eyes on our own weak squares and king safety and at the same time exploit our opponents’ weaknesses all throughout the game without slipping. Just as challenging in life.
Could you please leave us with a favorite piece of chess wisdom to conclude this interview?
– “Tactics is knowing what to do when there is something to do; strategy is knowing what to do when there is nothing to do.” – Savielly Tartakower

Posted by Ashik Uzzaman at 6:05 PM No comments: 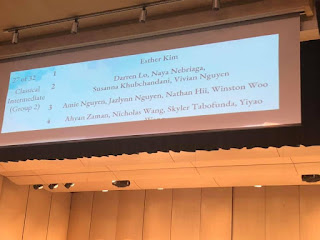 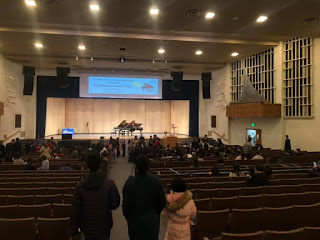 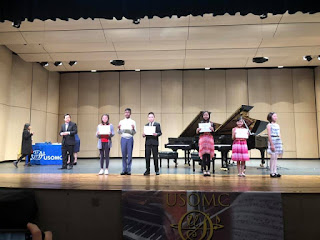 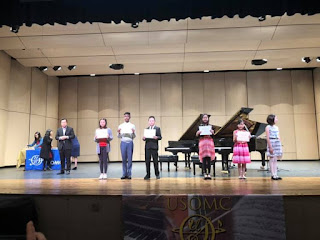 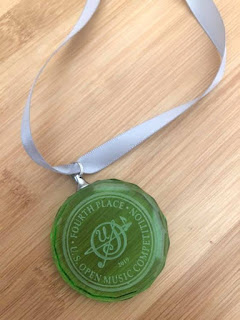 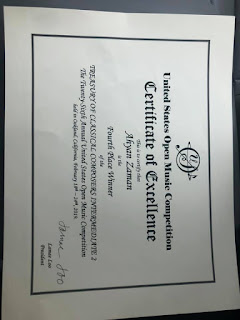 Excerpt from the invitation email.

Dear Ahyan Zaman,
Congratulations!!!
You are the Fourth place winner(s) in the event of
TREASURY OF CLASSICAL COMPOSERS INTERMEDIATE 2
Medals and certificates of all winners in this event will be distributed at
Concert # 2, Saturday February 23, 2019, 9:30 AM at the Auditorium

The Auditorium is in the same location as for the competition:

Posted by Ashik Uzzaman at 3:00 PM No comments:

Ahyan Finally Defeated Me In A Competitive Chess Tournament

This finally happened. Ahyan defeated me for the first time in a competitive chess tournament despite my rating being more than 300 points than his. We are playing in 19th Henry Memorial Chess tournament today at Mechanics Chess Institute, San Francisco. This is a 5 round Swiss where after first 3 rounds both of us were at 2. Consequently I got white in 4th round against him. I gained a pawn putting some positional pressure and got greedy to get the second pawn. So I got into a long defensive position and miscalculated a pin which I thought I can defend. Well no. Ahyan piled all his pieces on the pinned Bishop despite having only 1 minute left in his clock. As it was a game in 40 with 5 seconds delay, seeing very low time in his clock, I didn’t resign until getting checkmated with the hope to flag him down on time. But we it didn’t work out for me. I have never given up any game in my life, and did my best to win. But kudos to him. Recently he had been crossing me in tactics multiple times (my chess.com puzzle rush best is 26 and Ahyan’s is 27 for example). The moves of the game is below but u will put a diagram tonight when at home. Ahyan will get some prize money if he wins the last round that we are about to head into. 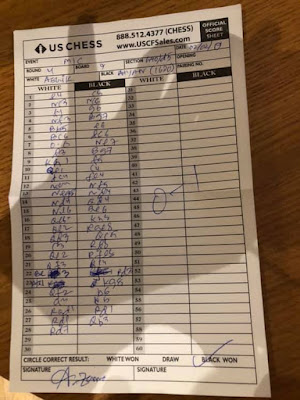 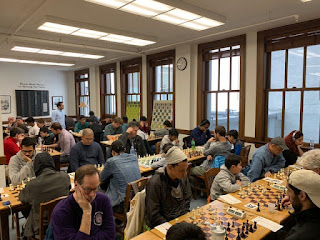 Posted by Ashik Uzzaman at 9:01 AM No comments:

Ahyan became CalChess State Champion in Under 1600 rating group in the Labor Day Weekend Tournament of 2018. He scored 5 out of 6 along with Mohammad S Khan. With the champions trophy he also got 966 dollars prize check and a 51 rating points increase to push him to the next rating group. You may find the full standings here.
http://www.uschess.org/msa/XtblMain.php…
My own performance in Under 2200 group was a disaster scoring 2 out of 6 and am pushed down 52 rating points and 1 group below. Ahyan is now 1 rating group behind to catch me. Also I ran for the CalChess Board Membership during this tournament. I lost by 2 votes less than the 4th board member who was elected but I see lots of responses from chess players and parents. I will try it again next year. Thanks to everyone who voted for me, supported me and encouraged me. 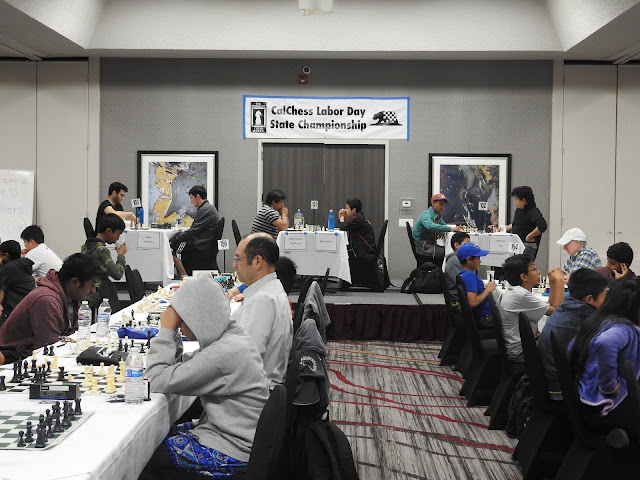 IM John Donaldson congratualted Ahyan at Mechanics' Institutechess newsletter - http://chessclub.org/news.php?n=842
"Congratulations to Mechanics’ member Ahyan Zaman, who tied for first in the under-1600 section of the Northern California state championship, held over Labor Day weekend. Ahyan scored 5–1 to raise his rating from 1590 to 1641."

Posted by Ashik Uzzaman at 9:22 AM No comments:

My Review of Star Wars BattleFront 2